Working Scientifically is a component of all secondary science courses in the current NSW Science Curriculum. Usually, this entails developing hypotheses, selecting the best course of action and materials to conduct investigations, carrying out the investigation safely and analysing the data produced in order to confirm or refute the hypothesis. In that melee, listening is a skill that we often don’t spend enough time doing. Students undertaking Science degrees at the tertiary level soon understand the importance of listening to formulate ideas for their own projects. Scientific lectures are commonplace and an integral part of being a scientist. 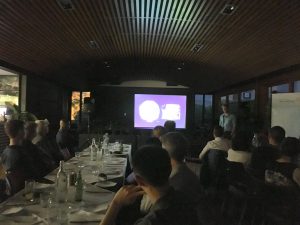 With Antonia Murphy and Austin Beck being in Sydney for work experience at Quantal Bioscience last week, it was most fortunate that a seminar (with dinner!) was happening in the same week. The seminar was organised by the Australian Society for Microbiology (ASM) and delivered by Associate Professor Justin Seymour from the University of Technology. His title “Swimming in the Sea: The natural history of marine microbes” was sufficiently vague to pique curiosity and was a great opportunity for Antonia and Austin to experience #scienceforreal

The talk dealt with microbial interactions and how they influence global events. Did you know that certain microorganisms are involved in producing sulfur aerosols above the ocean, seeding clouds and thus influencing the weather? As the ocean is very turbulent it was thought that all microorganisms would be found in all reaches of the world’s oceans but it turns out not to be the case. Indeed, climate change has caused changes in the East Australian Current (EAC) down the coast of NSW and Victoria, and has brought tropical microorganisms very far south, where they are usually not found in abundance. What this means on a global scale is unknown. We also learnt that microorganisms alter how fast they swim towards nutrients in a process called chemokinesis and they hang around other organisms excreting nutrients. An analogy is like flies around a dead carcass. To think that bacteria possess this “knowledge” is staggering for such small creatures with tiny genomes.

The experience taught Antonia and Austin about the importance of collaboration with scientists from many different fields. Amazing graphical representations of the data revealed that Chemists and Computer Scientists must have been involved in the process, and the acknowledgment slide had at least 15 collaborators mentioned. Additionally, Associate Professor Seymour shared the work of his past PhD students, who both happened to be women, thus reflecting the prominent roles that women hold in modern Science. 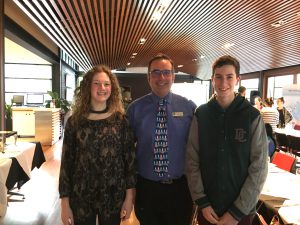 Antonia Murphy, Dr. Nelson and Austin Beck at the lecture.

At dinner, the students met several microbiologists, one of whom had worked with diseases such as leprosy and elephantiasis, caused by a filarial worm that blocks lymph nodes producing massive swelling in the limbs. Many people have never even heard of these diseases, so it served as a reminder that in some parts of the world, these seemingly forgotten diseases are still major concerns for some. In all, an excellent opportunity for our students to appreciate a world beyond the dam wall.