SMGS Drama Academy students are touring south-east NSW with their unique production, “A Journey through 100 Years of War Poetry”, to raise funds for their benefactor and patron, Legacy Australia.

The performance is based on a collection of war poems from the 19th and 20th centuries in remembrance of the authors and soldiers of all conflicts. Through the unique medium of Physical Theatre (a form of theatre which emphasises the use of physical movement, as in dance and mime, for expression) performers explore the themes of war, and changing attitudes over the ages.

The intriguing program is divided into the four major themes of war and includes poems from a range of Australian and international war poets. These themes, poems and poets include:

THE GLORY OF WAR

War of the 19th Century

“After the Battle” – Victor Hugo

“The Charge of the Light Brigade” – Alfred, Lord Tennyson

THE REFLECTION OF WAR

The Boer War and Gallipoli

“I Killed a Man at Graspan” –Monty Grover

THE ANGER OF WAR

THE SADNESS OF WAR

When asked about the outcomes for the student performers and their audiences, Head of the Drama Academy at SMGS, Mrs Catherine Batson said, “The outcomes for our students, their peers and the respective audiences lie predominantly in the subjects of History, English and Drama:

On the result of tackling a production with such a dark and heavy theme for students to perform, Mrs Batson explained, “I think the most rewarding part of this journey for me would be seeing students from SMGS united with students from other schools in finding a new appreciation for war poetry. They’ve discovered more about our changing perspectives of war, whilst empathising with soldiers and their families from generations past. I’d like to think this has enabled the actors and audiences alike to question war today and how we can work towards a more peaceful world through a greater understanding of humanity as being one race.”

Head of Senior School Mrs Kelli Wilson is proud of these SMGS students for wholeheartedly taking on this project and for their efforts to support such an important organisation as Legacy Australia. Mrs Wilson stated, “With ANZAC Day approaching, the production “A Journey through 100 Years of War Poetry” is very timely. It has provided our students with an outlet to give their respects to the soldiers who have paved the way for our safety and amazing life here in Australia. It is our duty to give these stories and poems of war a voice, but the families of the soldiers should be the ones that directly benefit from the performances.”

Tickets are on sale now for both public performances at the door or at the SMGS front office, $5.00 Students and Senior Citizens, $10.00 Adults. All profits go directly to Legacy Australia. For more information, please visit www.smgs.nsw.edu.au/poetrytour or phone: 02 6457 1022. 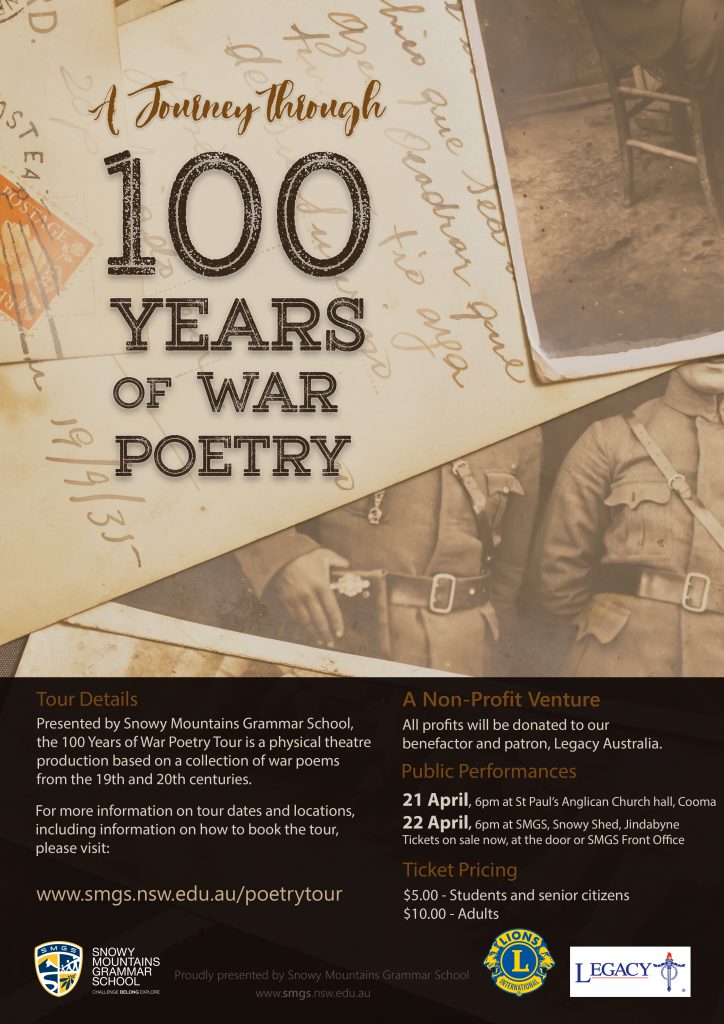