Year 12 Chemistry undertake a study of organic chemistry as the third unit of the syllabus. This is the branch of chemistry dealing with compounds mainly made of carbon and hydrogen, and sometimes with oxygen or nitrogen, many of which are commonly used in the household. For example, methylated spirits is a combination of the simple alcohols methanol (CH3OH) and ethanol (C2H5OH). Ethanol, and sometimes longer chain alcohols, are used in hand sanitiser, which has been more important than ever in the fight against COVID-19. Octane (C8H18) is the major constituent of petrol, and natural gas is a mixture of the simple alkanes propane and butane.

Organic chemicals often have powerful odours. Esters are a more complex type of hydrocarbon which are made by students using a process called reflux. Esters often smell fruity and are usually very pleasant. Many types of confectionery, such as “banana lollies”, contain esters and provide their characteristic aroma. This year, students made the esters octyl methanoate and propyl pentanoate, which are meant to smell like oranges and apricots respectively. Although the final products were reminiscent of these fruits, they weren’t overly convincing but were nevertheless “pleasant”. 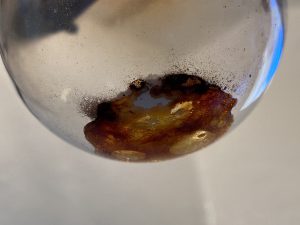 Cadaverine (1,5-diaminopentane) is made via the decarboxylation of the amino acid lysine.

At the other end of the scale are compounds called amines. These compounds contain an amine group (-NH2) and are ubiquitous in biological systems. Although the experiment is not in the syllabus, students were excited to make the compound 1,5-diaminopentane, otherwise known as cadaverine, and yes, this compound smells like rotting flesh! Cadaverine is a yellow liquid at room temperature and is also produced in very small amounts in the “living” human body. We produced a very small amount through the decarboxylation of the amino acid lysine. This involves heating the lysine gently with some sodium carbonate to absorb the hydrochloric acid that is produced in the reaction. Trepidation built as the compound was synthesised (in the fume hood of course) and students gathered to judge the final product.

The structure of cadaverine.

As expected, cadaverine indeed possesses a revolting odour that students will not easily forget. At least one student asked why we were making it. My answer would be: why not? Despite the rank odour, it is a wonderful learning experience where chemistry skills can be put to good use. 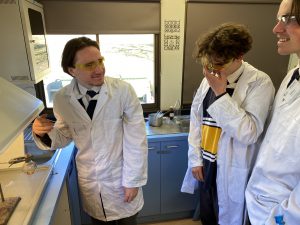 As anticipated, cadaverine was not a very pleasant smelling organic chemical!